TKMom here.
We took Squashies to the Vet on Thursday night.  She had clear fluid trickling from her black ear.  This wasn't a total panic, she's had this before.  Apparently, before she came to be our little girl, she had a really bad ear-mite episode which left her canals pretty scarred.  But when the Vet looked in, she saw a 'growth', which she later called a mass, which she said would require surgery to remove.

The doctor said she couldn't tell exactly what it was, because of the swelling in Squashies' canal.  So I'm going to give her drops q2 for 1 week. This to bring the swelling down so the mass can be inspected properly.

Squashies is such a good little girl, and she's had a very hard life.  It just seems totally unfair that now that she's found a little happiness that this would happen.  She could sure use some good vibs. 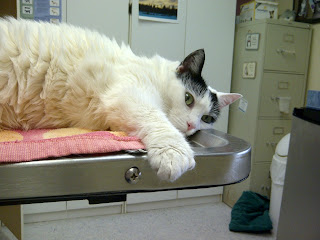