In the cat blogging world there are legends, there are icons, and then there is Skeezix.  His blog is in a class that transcends these labels.  He lived and wrote with honest innocents, and eager enthusiasm.   His antics took him all over the world, and he did everything with a sense of joy, with no regard to how he would be perceived.  His innocent happiness burned through the blog pages and into our hearts.  It made him our hero.


We could learn a lot from this little cat.  He lived his life fearlessly! 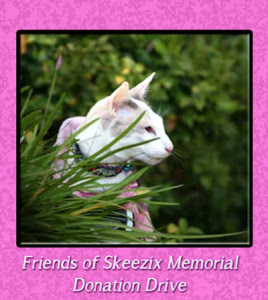 If you are new to the cat blogging world, missed this blog or simply want to relive the awesomeness that this little guy brought us- I urge you to get a beverage, and start here.

The Friends of Skeezix is having a  Memorial Drive.  Donations will be made to a shelter charity of Skeezix's family choice.

Thank you, Skeezix, you are amazing.  I bet you have them laughing at the bridge.
Posted by Pip at 10:51 AM 38 comments:

TKMom here, to tell you about a mystery, for which I hope you will help to solve.

I was peacefully sleeping at 3:30am this morning, when a great game of chase ensued around the bedroom. Up the cat tree, under the bed, over the sleepy drum.  I sat up just as TK chased Pip, who had a toy in his mouth, across the foot of the bed.

"Goofy boys," I thought as I tucked the covers over my shoulder and laid down to return to the land of slumber.

At around 4am, TK jumped up on the bed.

"Hey Buddy," I said, leaning over to give him a scritch.  These early morning visits are not unusual. TK often wakes me up to remind me that Breakfast-time is in 2 hours... and 1 hour... and 15 minutes.

Never having opened my eyes, I fell back to my pillow, only to be awakened again by TK softly "mowing" to himself in 30 second intervals.

At this point I was fully awake.  I'd never heard him make that noise before. Fearing that he was injured or sick, I shot out of bed to turn on the lights.  And there, between his paws, on my bedspread lay the object of his attention... The "toy" from the earlier chase, then in Pip's mouth, was actually a tiny corpse that our furend Max would call a "real live dead mouse."

I actually hesitated for a few seconds to ponder the correct cat-protocol for receiving a gift of such magnitude.  I wondered who had actually caught the mouse, and would it be bad for me to praise TK if he had stolen the kill from Pip.

Grabbing a Clorox wipe from the shelf, I gave TK a lot of praise as I picked up the mouse.  (I figured he was trying to feed me, like I fed him all the time. Even if he didn't actually make the kill, he obviously wanted me to have it.)

So what do you think?  Who is the "working cat" that killed the mouse?

The clues:
To challenge that assumption:
So what do you think?  Was it-
a) TK
b) Pip
c) Group effort
d) it doesn't really matter, they are both awesome boys!


*Edit- for those not on FaceBook.
When we got home in April, from our month long visit to Florida, my husband noticed a large mound of sunflower seed husks behind the bag of seeds we feed to the birds. (Our neighbor fed them while we were away.)

Three days after our return there was a bit of blood and a mouse tail on the basement floor.  12 hours later their was a partially digested (sorry) body of a mouse, sans-tail.
We had, at the time, assumed Pip had gotten the mouse... but did he?
Posted by Pip at 11:19 AM 33 comments:

Me juss wants to sends out a furry speshul Birthday wish for mine Auntie Marg. Evfurrybody knows how speshul her is, that the whole innernets is selabrating! 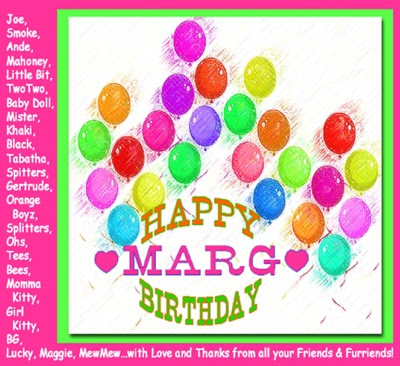 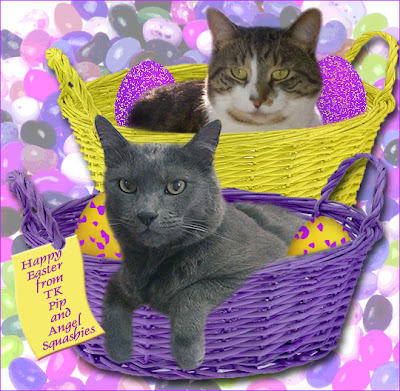 Dis our Easter baskets that Auntie Ann makes fur us. Me is in front acause dis mine blog. Mommy says we gets to eats the eggs after efurryone sees us in our baskets. Me bets our Auntie Ann puts treats in them fur us, like her puts in her nice bags fur us when mommy goes to her luncheon.

We is having fun in Florida!  I gets to walks on my leash efuryday acause a mancat needs to checks out him's territory even when him is travelling.  There is so much to checks out!


Me hopes evfurrybody has a great Holiday.
TK
Posted by Pip at 11:04 PM 19 comments:

A Visit with Maggy, Zoey and Ann, a Portrait of Angel Squashies

Hello, Pip here.
We are in Florida!  In fact we have been in Florida for a whole month.
It has been furry cold in Florida, but is still warmer than it is back home in Maryland.  They have had lots of cold and snow at home.  I don't like the snow or the cold, on account that I had to live in it fur 2 whole years before mommy convinced me to live with her and daddy and TK.

It has been a hard adjustment fur me. I was so ascairt, I spent the first three days UTB. Then I heard mommy tell daddy that she was going to cancel the trip and take me back home, so I wouldn't be ascairt.  So I came out for a while so she wouldn't do that.  Then I came out more and more.  First I would hide when peoples walked by, but then I figured out that no one but mommy and daddy would come in the van.  Now I am out all the time! (Peoples still scairt me. I'm not tell you why! But you would be ascairt too!)

So first mommy got to go visit Maggy and Zoey. It was a furry nice luncheon that Maggy and Zoey's Mommy, puts together so my mommy gets to meet all the Florida friends.  There was Angel Max, Bugsy and Knuckle's HH. (and flat Max!), Angel Sniffie, Angel Tamir, Ellie, Allie, Raz, Clifford and Cubby's Mom (and flat Raz!), and even Auntie Elinor cames, which was furry special because she is furry sick. *Purr, Purr, Purr, Purr*.

﻿
While at the lunch Angel Max's HH mentioned that she is doing a new series of paintings called "Cats in Motion" and she wondered if mommy had any pictures that would work.  So mommy came home and looked at her thousands of photos of all of us, and sent a few to her for consideration.  And guess what?  She did one of
Angel Squashies!  She is so talented.  And guess what else?  Mommy got the picture to hang above Squashies' ashes on her desk, where she can see them all day... when she is at home.

Mommy and daddy have been doing lots of stuff. Daddy has played lots of golf, and mommy has done lots of work (LOL).  They went to an airshow, and took an air boat ride, and saw lots of birds. Birding is a hobby of mommy's and she added lots of new birds to her bird list.  (Birding is a hobby of TK and mine too, but I don't think it's the same thing at all.)

And then, Maggy and Zoey stopped by to invite us to lunch!  They were furry nice and didn't want to scairt me.

So then mommy and Zoey and Maggy's mommy had a wonderful day together.  They had lunch and went shopping and chatted and chatted like sisters. My mommy had such a great time!  Before mommy knew it, the day was over.

We are going to be very sad to leave Florida.  But this is not the end of the trip!  Mommy is going to take the Van to Huntsville, AL to visit her sister for a week.  And then we are going to have another visit with a mystery Blogger, that has TK's tail quivering. (Can you guess who?)

You all have a safe and happy Holiday.
Love, Pip-Squeak