Hi blog friends, TK's mom here. I had promised that I would tell you about Midnight, and given that today is the 3rd anniversary of his "Gotcha Day" I thought I would fulfill that obligation. It seems like a long post, so if you chose to skip-it, I completely understand. For me the writing and remembering was cathartic and I am grateful to have this forum to present it.

The weather in the month of February 2007 consisted mostly of sub-freezing temperatures with sustained high winds, and where the snow wasn’t frequent, it stayed on the ground for almost the whole month. As such I had relocated from the third story, west facing office, to the second floor, east facing living room to work.

I was sitting on the comfy couch, laptop in my lap when I heard this mewing sound outside. I quickly went to the door to find a little black kitten sitting on the steps looking up at me through the screen door window, meowing at the top of his lungs. He was very thin and was sitting with his tail tucked around his little feet. (I use the masculine pronoun thanks to hind-sight; in fact we thought he was a girl until several weeks later.)

I knew nothing about cats, but I could tell this one was in trouble, so I opened the door to let him in the house, at which he promptly ran away and hid in the bushes. So I went to the fridge and got him some left-over ground beef, heated it on a little plate and set it and a bowl of water on the steps for him. Once I closed the door he peeked out from his hidy-hole and cautiously came to the plate and ate.

We continued to feed him like this three times a day for several days. Every day I stayed out with the plate a little longer and every day he would get a little closer before sitting down to wait for me to leave.

Assuming that we were going to have to take care of this kitty through the winter, my husband went to the grocery and bought kitten food. Three times a day the kitten would show up to get a warm meal and some water. And as you might guess, I got emotionally involved. When he was late I would start pacing the living room, thinking of all the things that could have happened to him in the big-bad woods.

During the second week two bigger cats, who must have figured out the cute-kitty scam, started following him and would push him away from his plate once I closed the door. I didn’t blame them, in fact I marveled at their ingenuity, BUT- they were not going to push MY kitten away. So I opened the door and they all ran away as ferals are apt to do. Then I sat on the far end of the stoop and waited for the kitten, who we were now calling Midnight, to come eat his food. He must have figured out that I was the lesser of the two evils in the scenerio, because after a few minutes of contemplation, he cautiously came up the steps and ate his food.

Once again hubby went to the grocery to buy outdoor calorie kibbles, which we, to this day, feed to the adult ferals on the other side of the house.

Every feeding time I would wrap myself in my big coat and sit with Midnight on the stoop while he finished his meal. Every day I got a little closer, and every time he would consider the distance between us before settling down to eat, while I sang silly little songs to him.

By week three he was eating right next to me, and on occasion would rub up against me on his way out, as if in thanks.

Then one night, I made a mistake, I stroked his head as he rubbed me and he ran away. I worried all night that he would be too afraid to come back. But I guess the stomach is mightier than a cat social foo-pah because he was back at 7am for his breakfast, and when he was done he stood next to me looking expectantly.  So I hesitantly rubbed his head again. This time instead of running, he purred.

Over time I gradually added brushing to our time together, and by the end of week 4 he would sit in my lap for an hour or so before he went back out to wherever he slept at night and I would go to bed and worry about him.

Once we had gotten it into our heads that we were going to be a cat family, we went on the internet and read up on what we needed. We bought toys and beds and a litter box. And throughout the month we tried in vain to get the little guy to come in the house. We tried coaxing him in with food and toys. He would get right up to the door, sometimes even sticking his head in, but it was obvious he had been trained to be afraid of the “inside”.

The closest we ever got to getting Midnight to walk into the house. 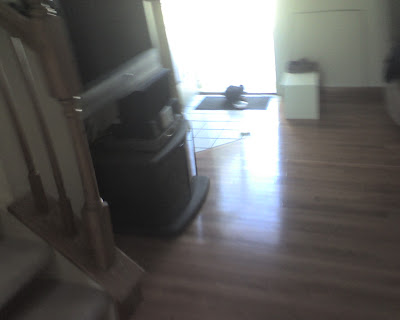 Then on March 2, 2007, while I was brushing him on the stoop after yet another sleepless night worrying about him, I violated his tiny-trust one last time. I picked him up and while my husband held the door, I walked with him into the house.

After a few hours of hiding behind the couch, he came out and used the litter box we had gotten him and started exploring the warm inside.


Midnight on his second day in the house. 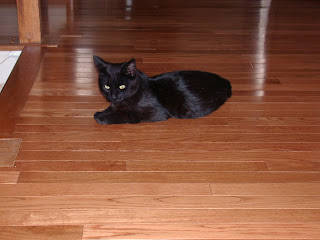 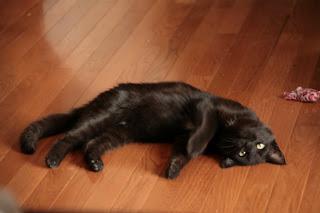 We never broke him of wanting be outside. We tried, (oh how we tried,) but he was the wild kitty that came to stay with us sometimes. He even made his own cat door in the screen on the second floor deck. He had no issue getting to the ground from there. 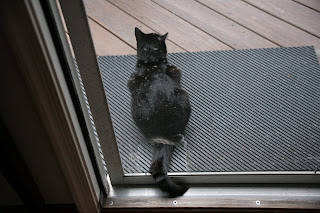 He and I became fast friends. Our relationship was always on his terms, and he remained cautious of other people, but he was my constant companion. For all too short a period, we were a happy family. 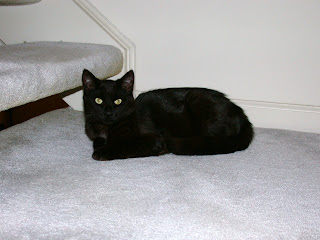